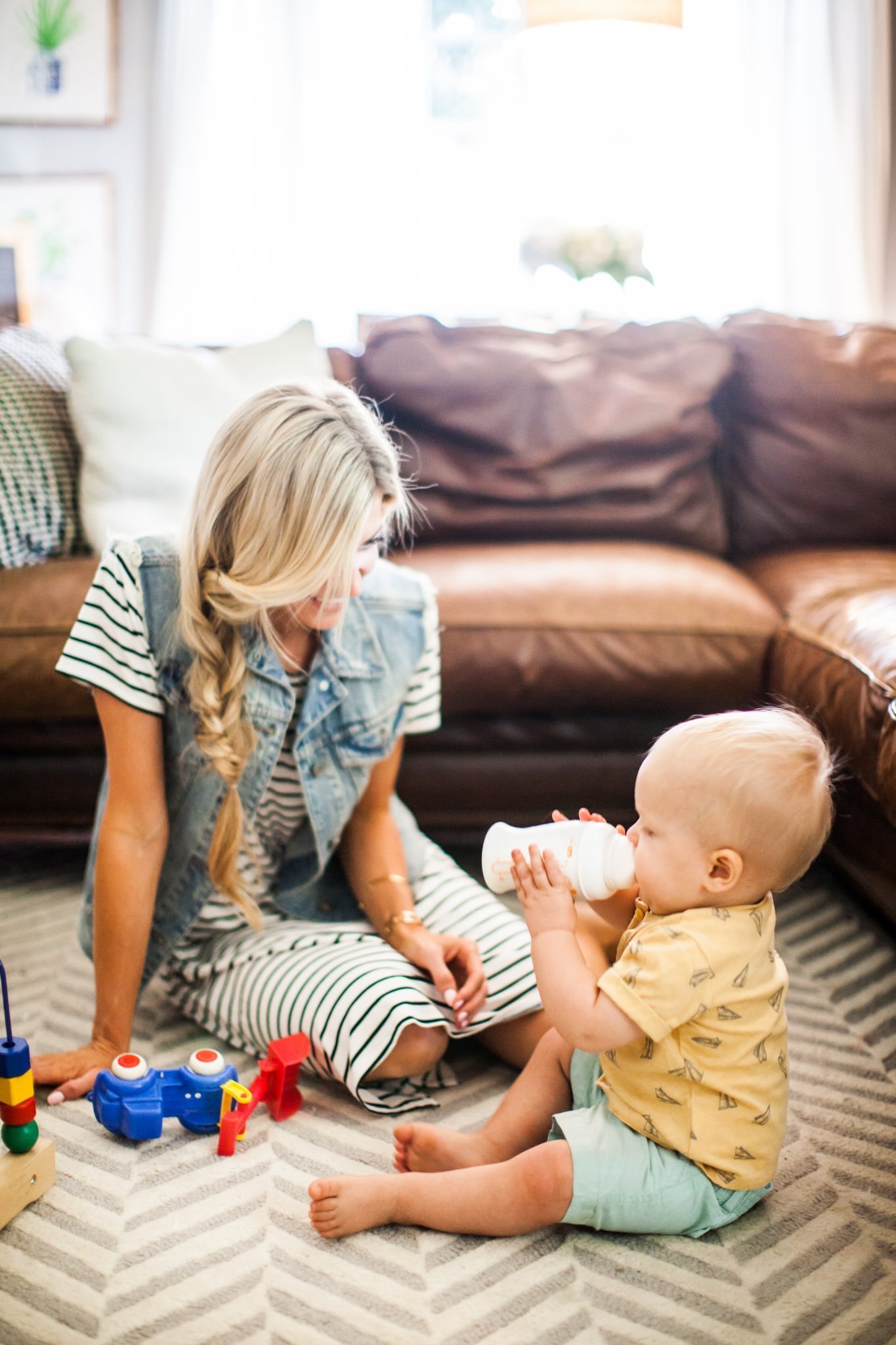 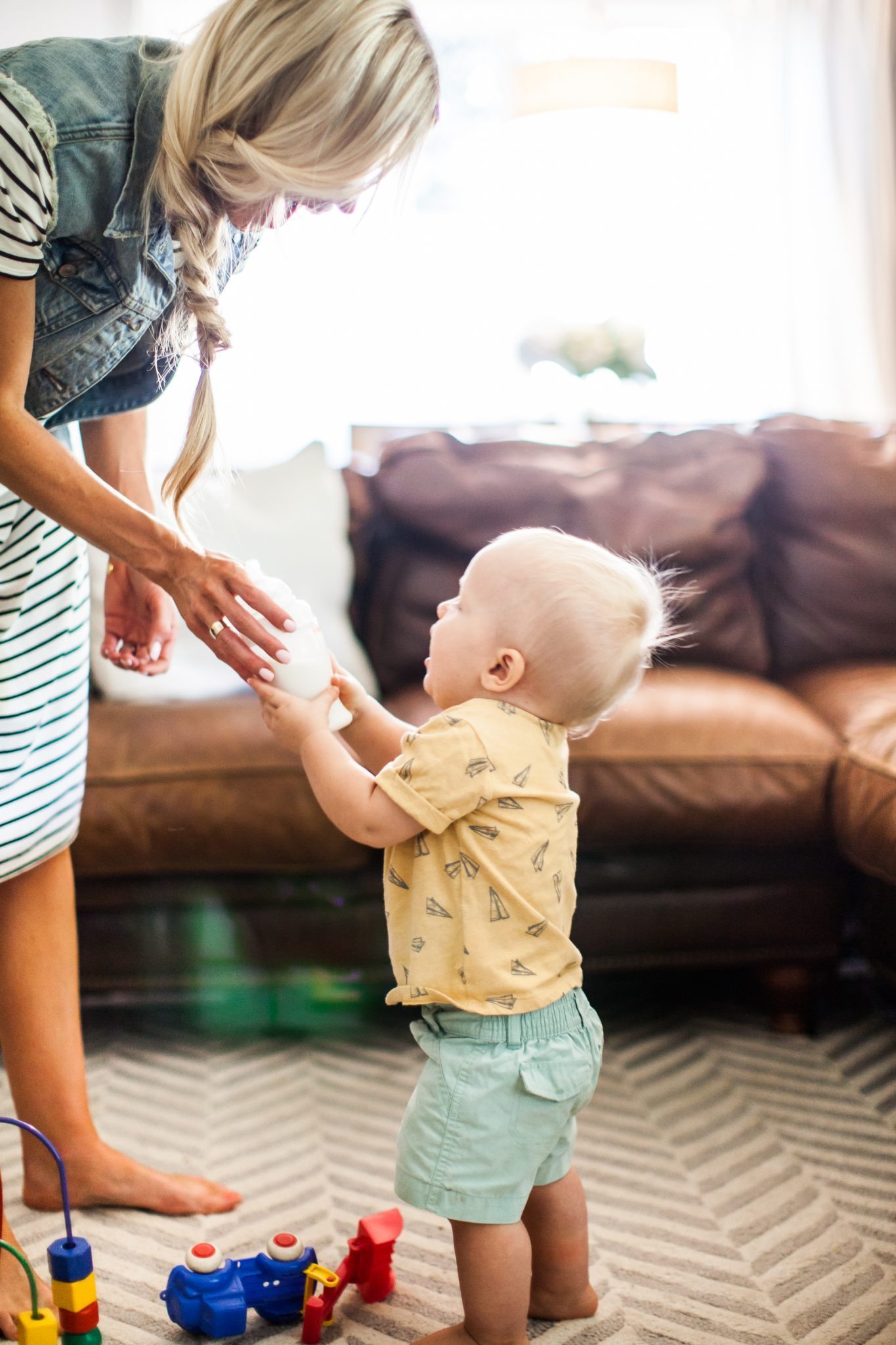 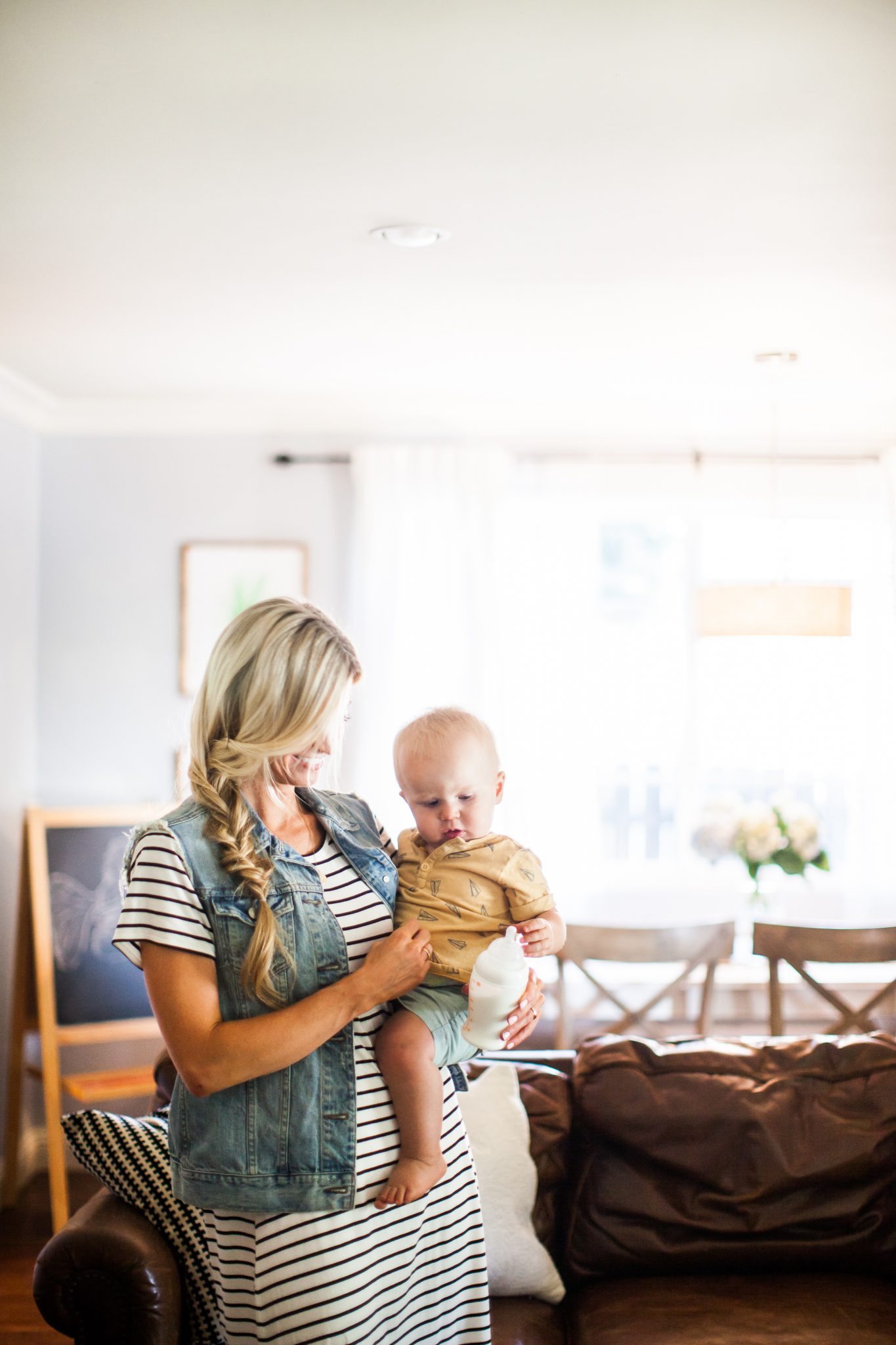 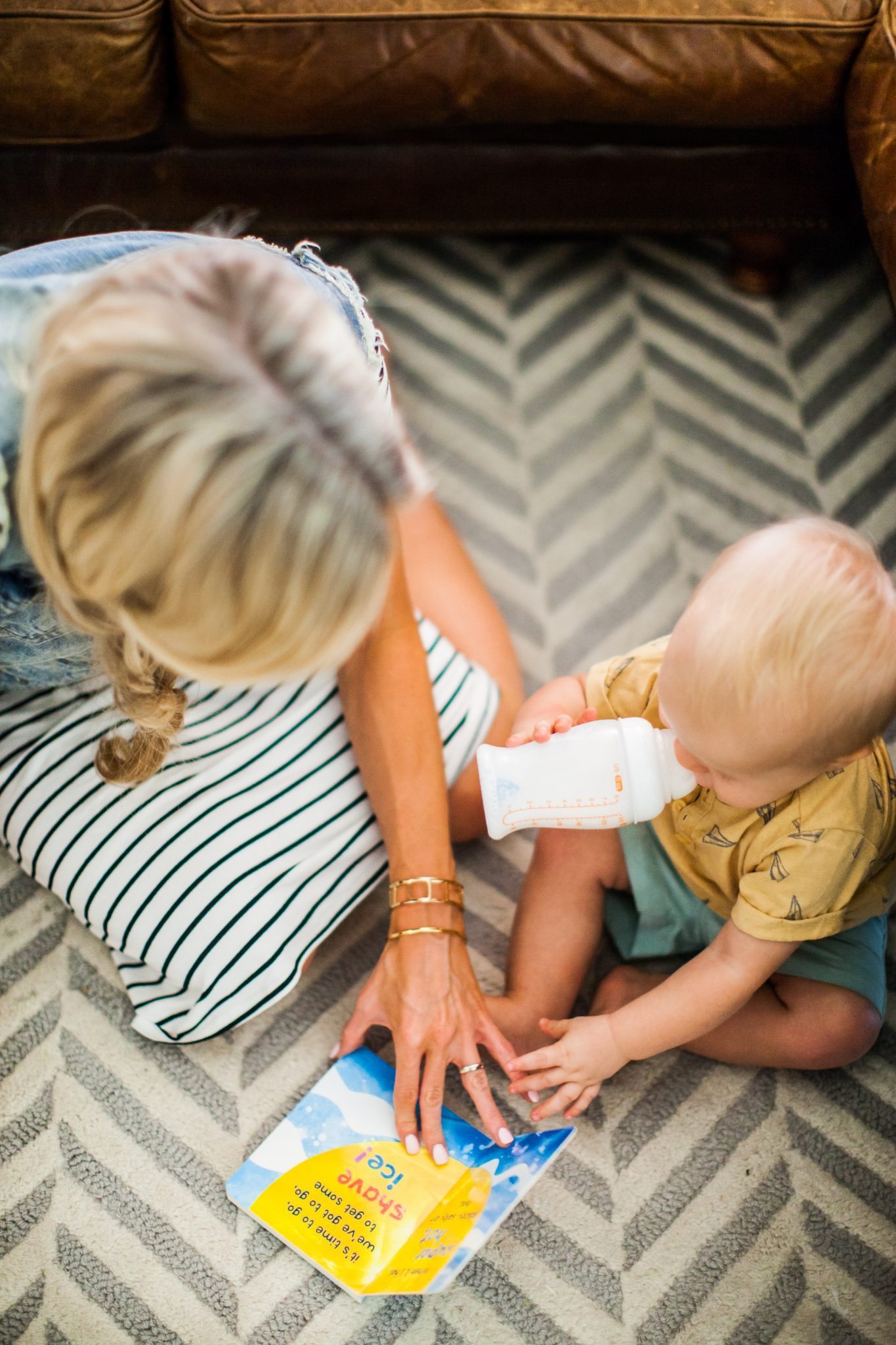 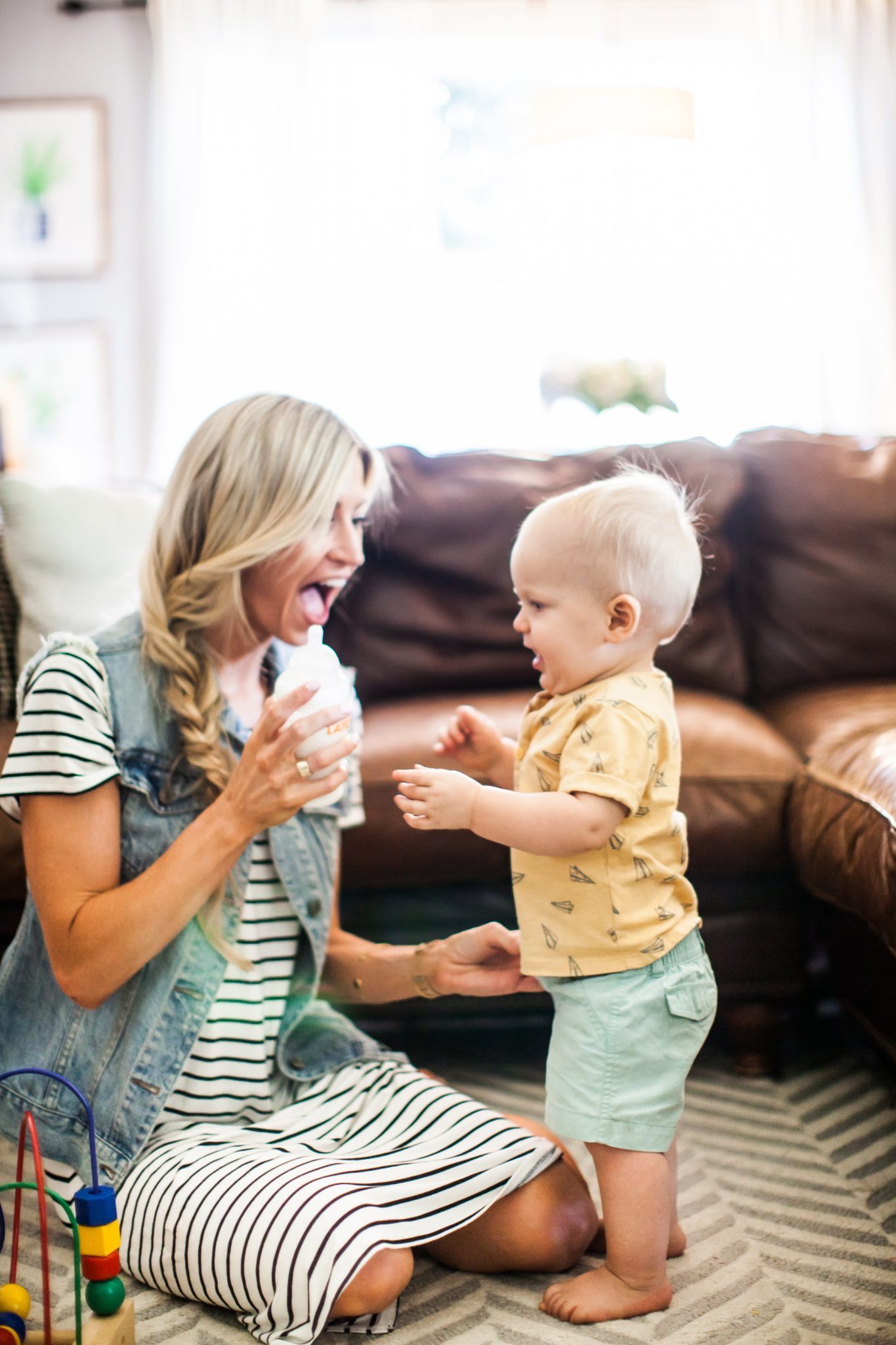 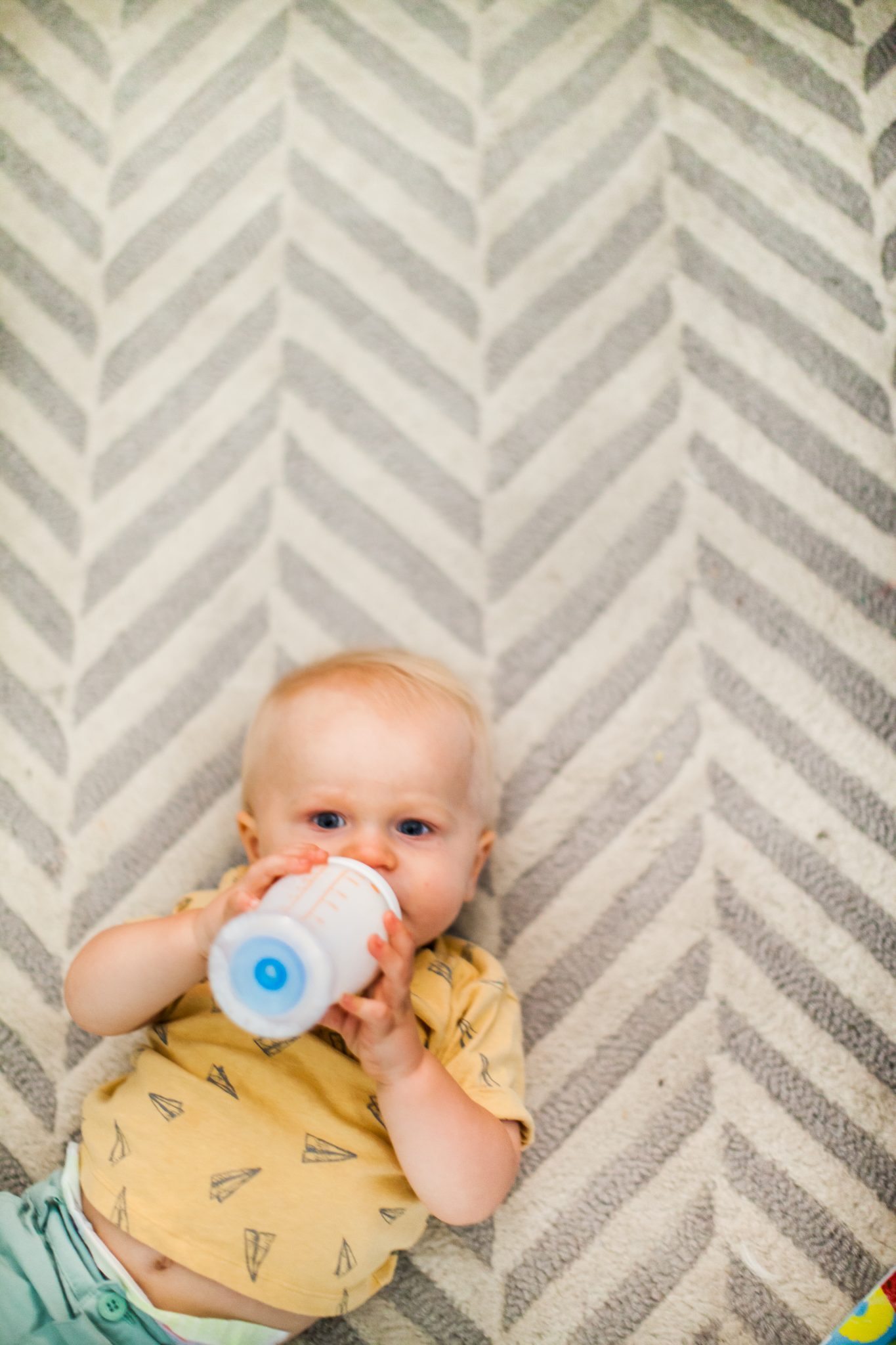 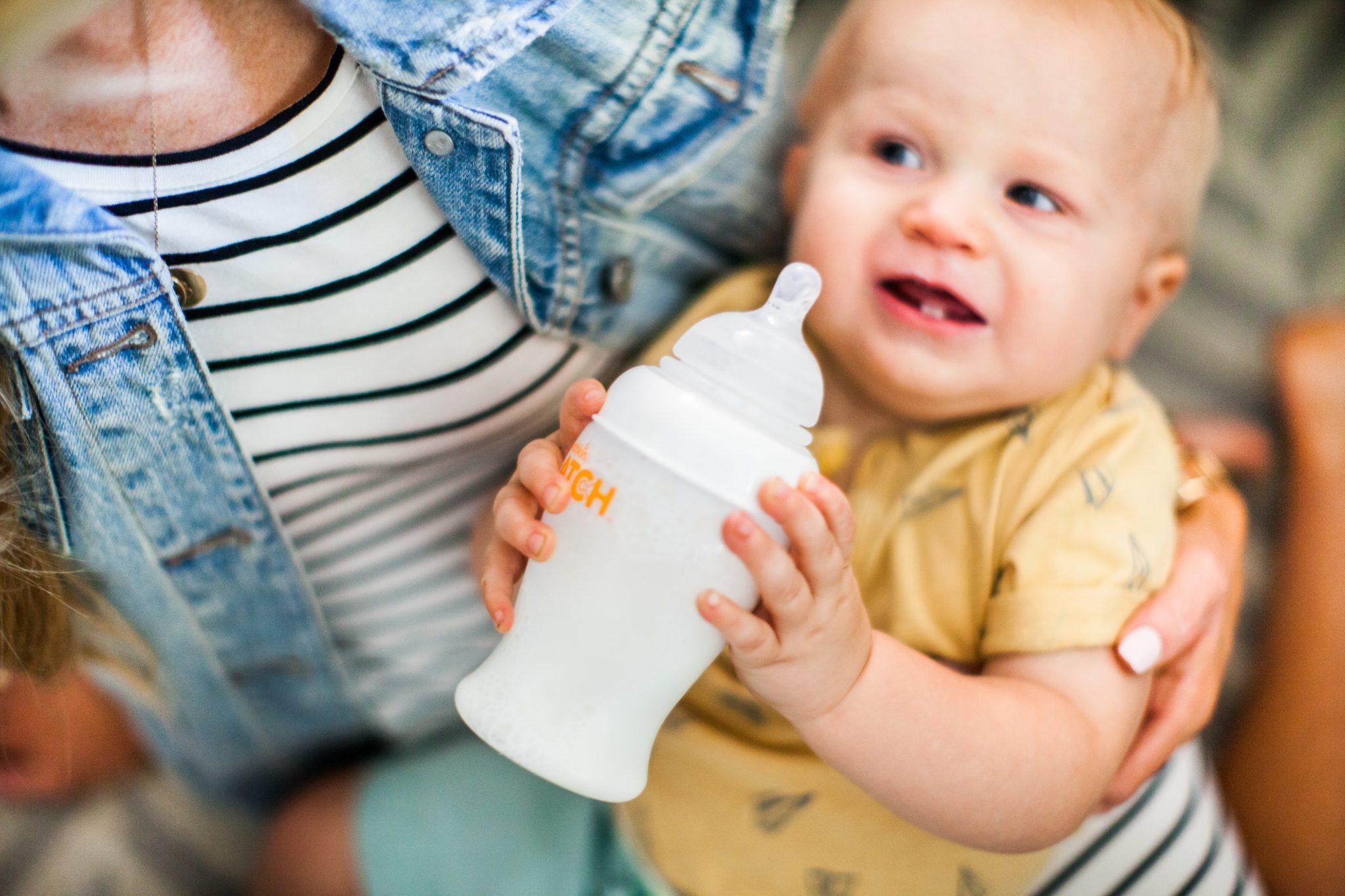 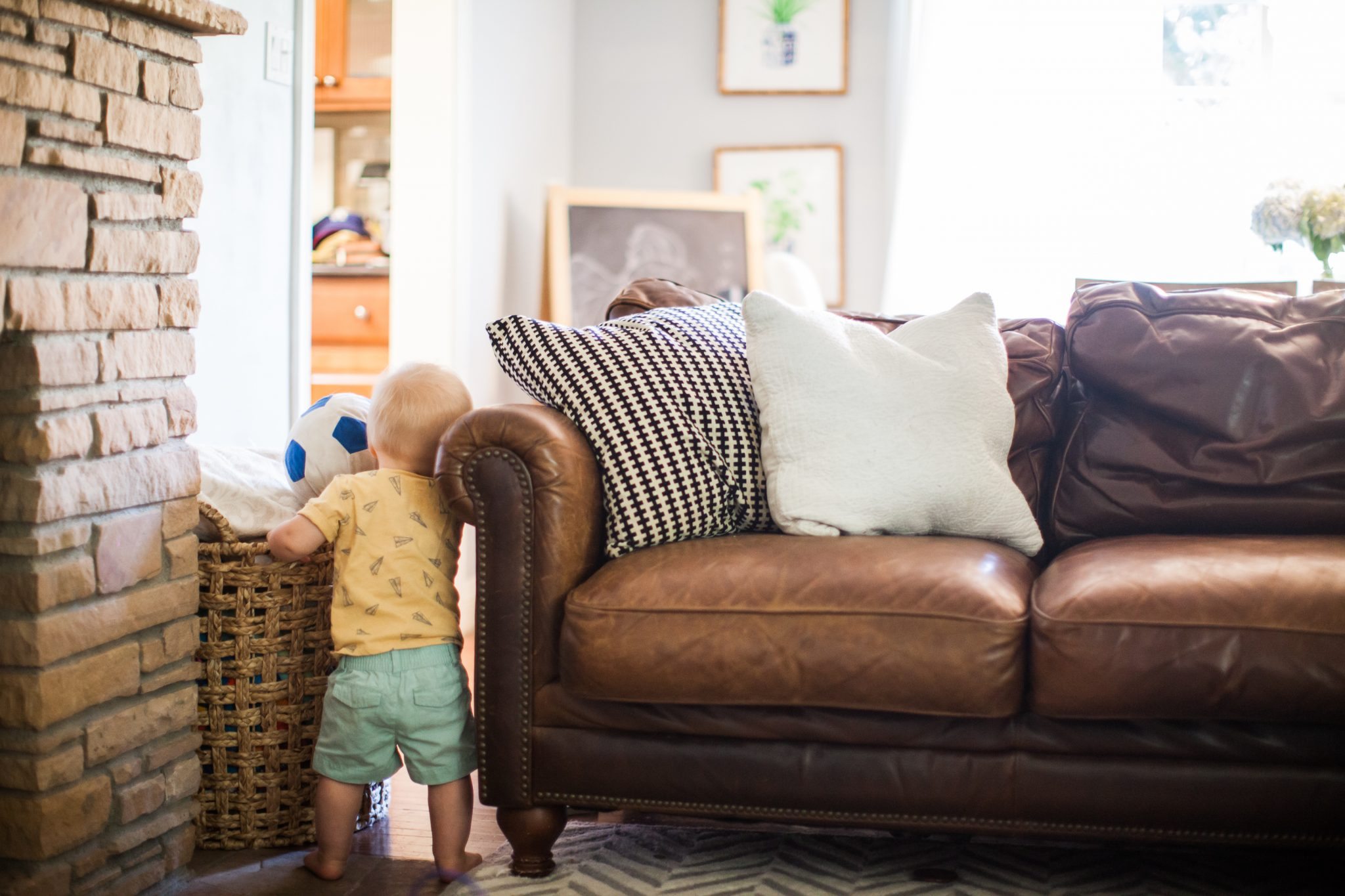 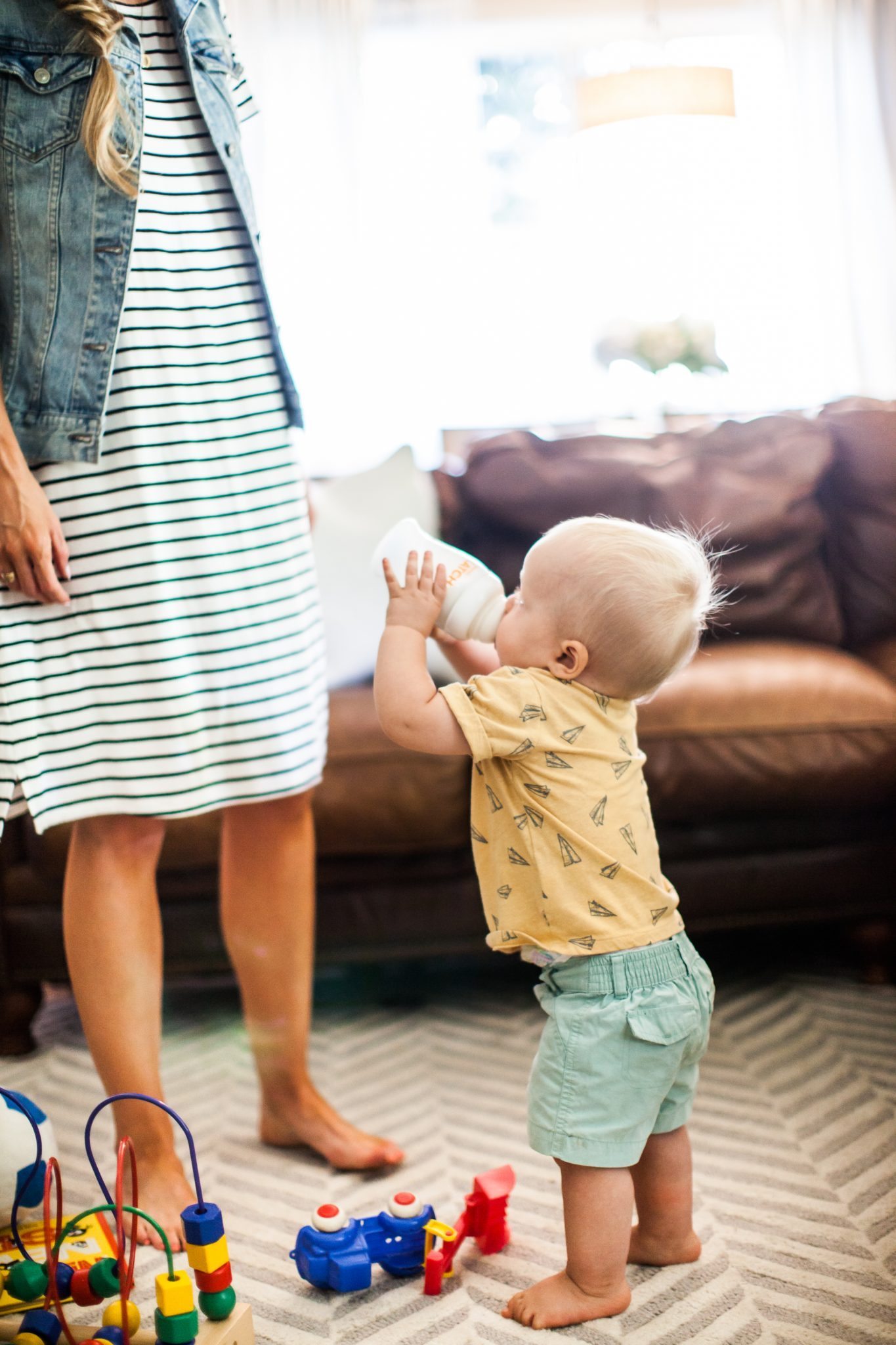 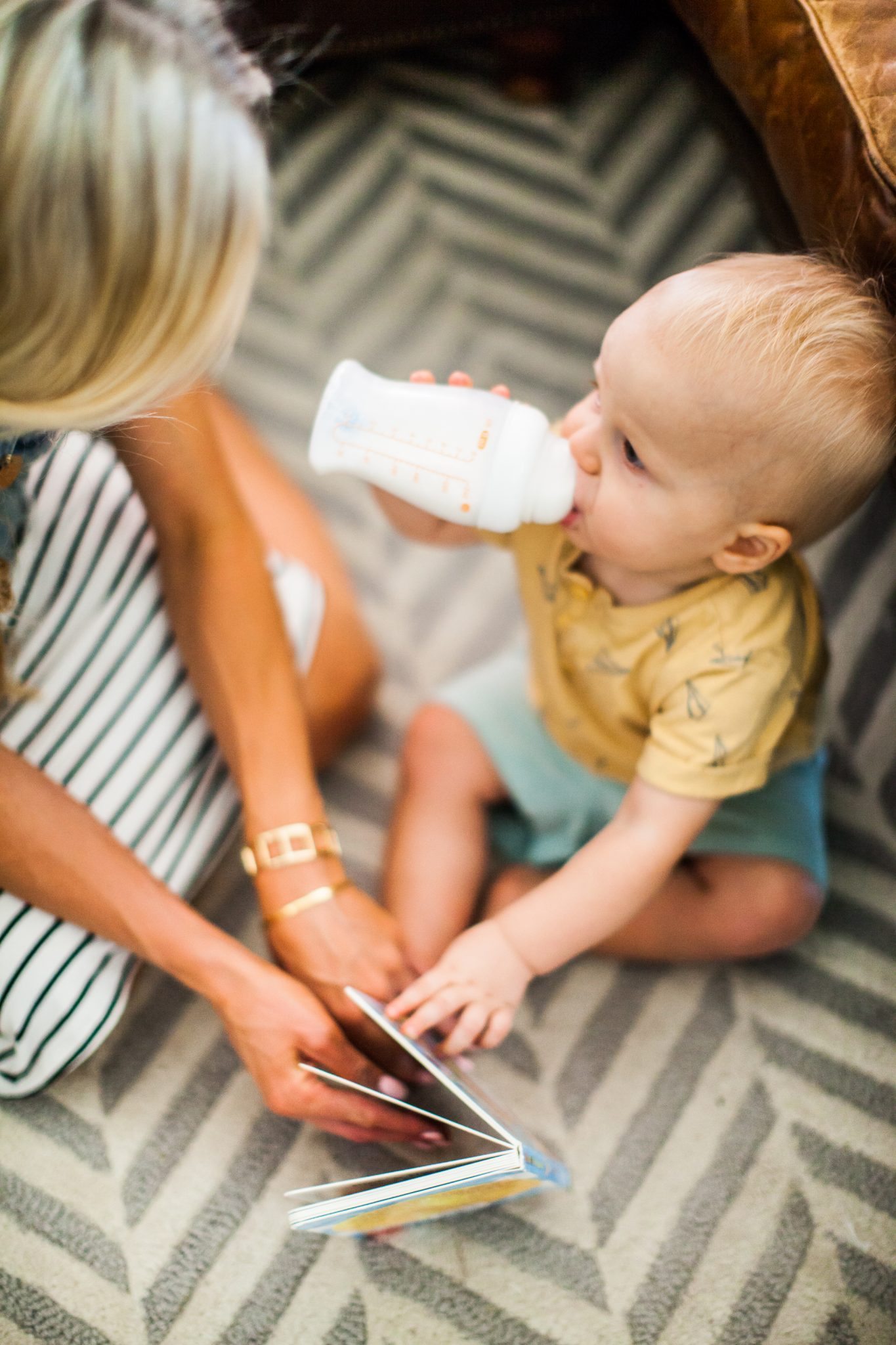 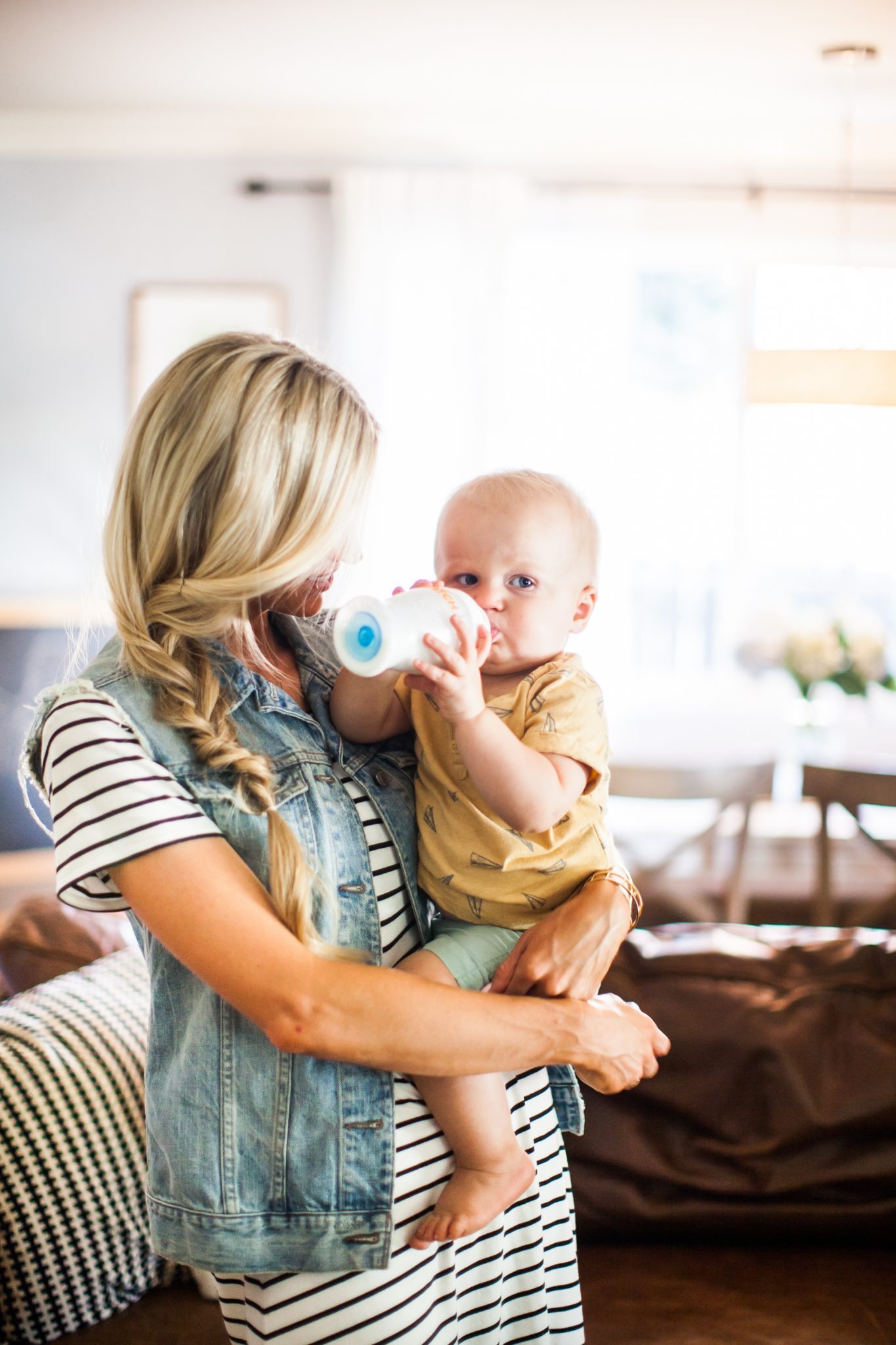 STRIPED DRESS (under $25 and its the perfect length!) | SIMILAR DISTRESSED DENIM VEST

Since August is Breastfeeding Awareness Month, I thought it would be fitting to talk about my experience with breastfeeding and how I transitioned into a bottle with Eli. I love that breastfeeding is celebrated and encouraged more now! I remember with Bradley I felt like I needed to go nurse in my car, or in a bathroom stall. This time with Eli, I felt comfortable nursing in public and noticed a lot more women doing the same! It is so refreshing and comforting to see!

Nursing is one of my absolute favorite parts about having a baby. In the very beginning, it is also the most painful. After I had my first baby, I felt like nobody warned me about how painful nursing is when you first start!! I thought maybe it would be less painful with my second and third..but nope. I still had to scream in a pillow and suffer through the pain of each latch for the first week or so after having each baby. But when your body finally gets used to it, and it isn’t painful anymore (and once your milk regulates), I cherished the one-on-one time I got to spend feeding my babies. There is something so special about how they need YOU and only YOU to get them the nutrition they need to grow and develop.

I always had a goal to nurse my babies for the first year of their lives, but I never was able to produce enough milk for them to last that long. My milk usually dried up around 8 or 9 months with my first two babies. So for me, weening was something that came on pretty abruptly, and often sooner than I wanted. With Eli, I wanted to be as prepared as possible to try and increase my milk supply. I ate a bowl of oatmeal every single morning, and took 3-6 Fenugreek pills every day (a natural supplement that help stimulate milk production). I also drank a TON of water…between 100-160 ounces a day. I think the combination of all these things really truly helped. I made it till almost 11 months!

After 11 months Eli was eating a ton and there was just no way I could keep up with what he needed. There were times when I was emotional just thinking about how he would probably down an 8 oz bottle, but I just couldn’t produce that for him. He was also getting more distracted while feeding, and had started cutting teeth (ouch!) so I decided that it would be in both of our best interests to switch to formula.

I had nursed him pretty much exclusively, and he had only taken a bottle here and there a few times. I decided to use the Munchin LATCH bottle when I made the official switch to formula because I had heard so many of my friends had success with that bottle. The nipple of the bottle is soft and adjustable, which made it really easy for Eli to drink from. I also like that the shape of the bottle is wider and shorter. It still holds 8 ounces, and it fits better in his hands. A wider bottle also makes it much easier to clean! Eli struggled for a while adjusting to the taste of formula (as you might have seen over on my snapchat). Some of you suggested to add a little apple juice to the milk at first and it totally helped!

Eli is now on whole milk and he loves it with all his heart (haha!). It is so comforting as a mom to see him get the amount of milk his body needs, and be able to hold the bottle himself and feel independent. While I still miss being able to nurse him every once in awhile, it is really nice to be able to hand him a bottle on car rides and let him feed himself! I love that the Latch bottle made for an easy adjustment into bottle feeding only, and that I can still use it now that he is bigger and taking whole milk.

What have your experiences been with nursing/weening? Have you tried the Munchkin LATCH bottle? I know every mom and baby is different so I would love to hear what worked and didn’t work for you!

in partnership with Munchin  |  photography by Kendra Maarse

WHEN MOMS GO BACK TO SCHOOL