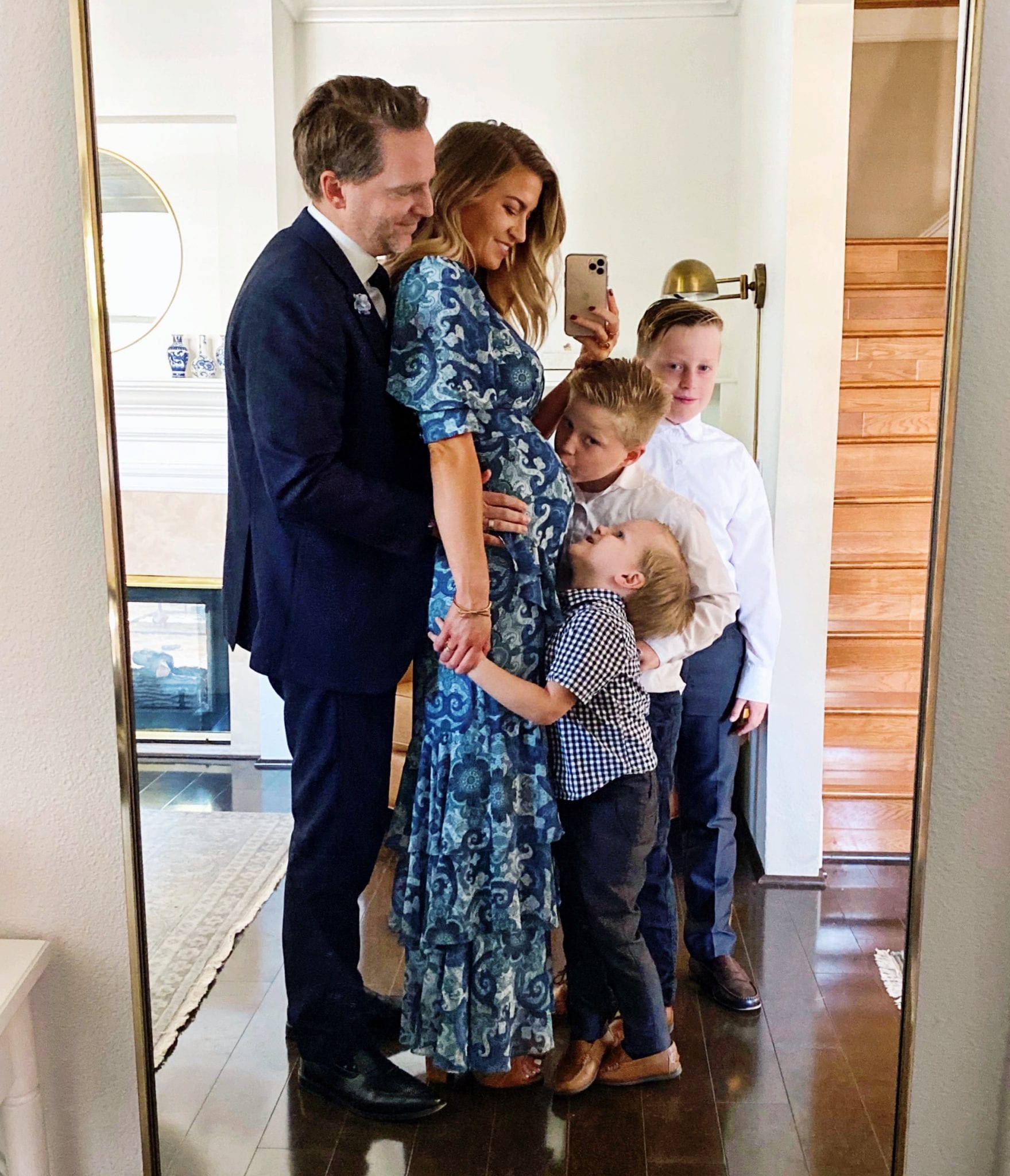 Ahhh! I’m pregnant! I’ve been so happy and so excited and dying to share this news with all you girls with what feels like forever. It’s such a weird thing to try and live my life a certain way on social while hiding such big news! I’m so not used to that, and it’s felt weird not being able to be so open (especially on stories) with you!

I wanted to write a more candid post about this pregnancy filling you in on lots of details. There has been kind of a lot going on behind the scenes and so much to say with this pregnancy. So here it goes… 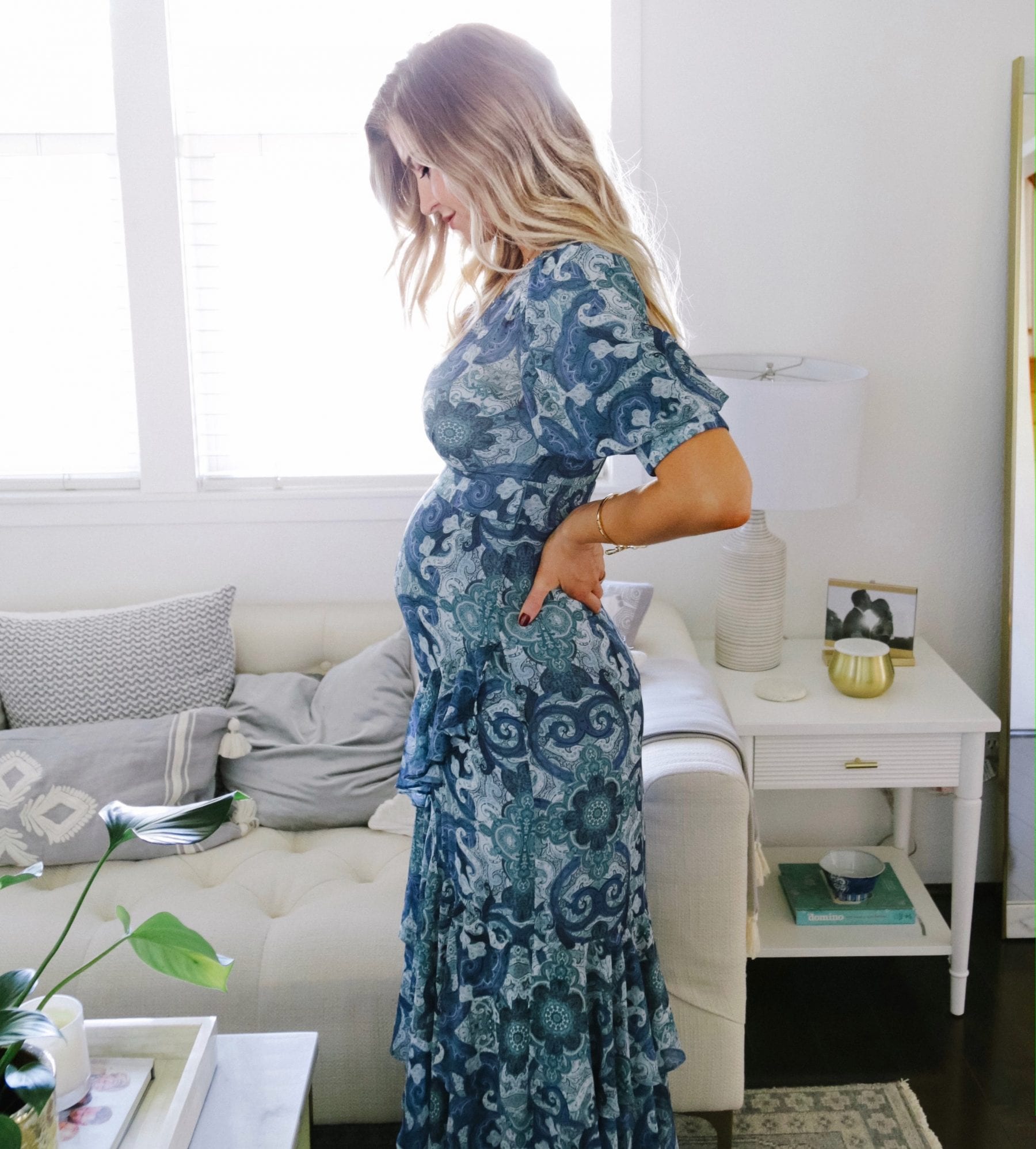 Was this pregnancy planned?

Yes! I always hoped that Eli wouldn’t be my last baby, and I knew we wanted more, but I was also very slow and mindful about when the right timing would be. We started having kids really early on, so I wasn’t in any rush with baby number four. Also..there is something really magical about Eli and I just wanted to soak up his littleness as much as possible! Things shift when a new baby comes along (in many great ways!) but that baby you once had is all of a sudden so much bigger than your new baby and I just wanted all the baby time with him. I also wanted to be at a slower paced place, not so many big projects, not so rushed. So we were very methodical and prayerful about the timing of this pregnancy and just so very grateful and happy that we have a new baby coming.

How far along? Due Date?

I am 14 weeks along, and due mid May. I’ve never had a spring baby and I’m just so excited to experience a baby in the spring! Also…to not be a hot sweaty mess at 9 months pregnant in August (*cough Bradley, *cough Eli).

Are you finding out the gender?

We are not finding out the gender. Crazy huh?! This one might need it’s own blog post sometime, but long story short – I feel really strongly that I want the focus of this pregnancy to be about the health of the baby and excitement for a new addition. I haven’t had great experiences finding out the gender of my babies in the past (or with comments from strangers around me…anyone remember this post?) so I feel really happy and content about not finding out. I’m going to be obsessed with this baby no matter what the gender! 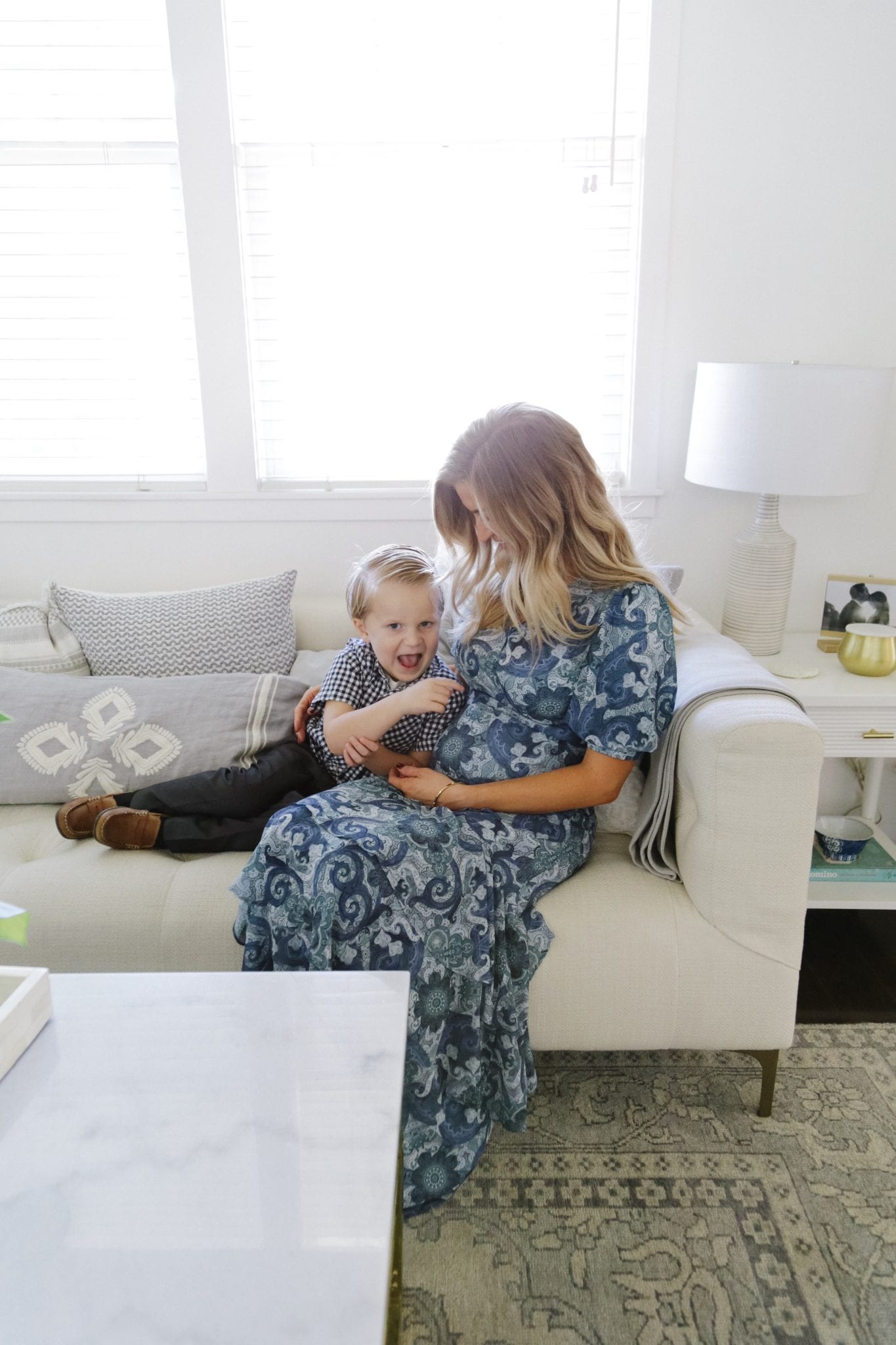 <Eli is SO excited to be a big brother! When we told him we were having a baby he said “I need to be a strong big brother!” and dropped to the ground and started doing push-ups>

How have you been feeling?

This is a bit of a loaded subject. I’ve been feeling pretty dang good. I didn’t even notice that big of a drop in energy the first few weeks. I definitely relied on my 26 minute nap every single day, but I was already taking them 3-4x a week. I still had great energy in the mornings. I was exercising 5-6 times a week, runnings 3 days, strength training 2-3 days, and I was so grateful! Working out had become such a mentally healthy time for me. It was when I got the most inspiration and the most energy. I was in a groove and so happy I was able to keep it up while pregnant.

I have been getting nauseous at night. I got a little nauseous with Cash at night, and super nauseous with Eli. I had zero sickness at all with Bradley. When I get nauseous my mouth starts salivating a ton and it’s like my body pretends it’s going to throw up, but I never actually do. The extra saliva is so gross!

I only threw up once with Cash on the side of the road and that’s it. I don’t start getting nauseous now until closer to 10pm now (thank goodness) but it used to kick in around 5pm and I would just fling Costco pizzas at the boys, tell them all their homework was probably correct, and countdown the minutes to bedtime. I wore sea bands on my wrists that I thiiiink helped (maybe it was a placebo effect…don’t know don’t care). I did a dang good job of eating healthy all day until I started feeling sick and then I would have Garrett run to the taco truck around the corner to get me 5 more street tacos even though I had 3 of them for dinner. Then I would sit in my bed at 11 pm crying eating street tacos because I felt like stuffing food down me was the only way to make the nausea stop.

I haven’t had too many cravings. The aftertaste of candy or sugar makes me so sick (but hasn’t stopped me from eating the boy’s Halloween candy). I made a special trip to the grocery store to buy 15 cent Top Ramen for lunch one day because it sounded amazing, and it was.

One time I saw this butter lettuce and tomato salad on someone’s insta stories and it made me salivate so much I had to go to Trader Joes and make my own every day for lunch for a week straight.

I’ve been strangely obsessed with eggs. I eat 2 fried eggs every morning and they are so good. I also have a bag of saltines on my nightstand. One of my favorite late night snacks is saltines with cream cheese spread on top and Trader Joe’s 21 Seasoning Salute sprinkled on top (most underrated TJ’s seasoning IMO…better than Everything But The Bagel). Try it!

I do also live and die for bubbly water. I’ve been pouring myself a glass of Perrier with ½ a squeezed lime every night and it really helps my nausea.

The not so great part…

This pregnancy was going so well and so wonderful, except a few weeks ago I had a little bit of a scare. I started bleeding a little bit and panicked because that hadn’t happened at all with any of my other pregnancies. I called my Dr. and she told me to lay down and let her know if there was more. I stood up after about an hour and there was a huge gush of blood (no other way to describe it! Sorry if this is TMI) My Dr. told me to rush to the ER right away. At the ER they checked on the baby and the baby was totally fine, but I had a good size subchorionic hemorrhage along my uterus wall. The size of it was a big concern with my Dr. She said if it got any bigger it could cause the placenta to detach, resulting in a miscarriage. So I was put on strict bed rest for 7-10 days. She also said after bedrest I wouldn’t be able to exercise until the end of my second trimester, and then only short walks.

It was a very scary time for all of us, but we prayed a ton and Garrett and I always felt like things were going to be okay. Throughout this whole pregnancy I’ve said that the baby’s heath is my #1 concern. Bed rest was not one single iota of fun. I would literally wake up in the morning, stand to brush my teeth, wash my face, use the restroom, and then lay back in bed….until bedtime. I was totally down to do anything to keep the baby safe…but I did start going a little stir crazy. One time I watched a spider crawl all the way up our ceiling and drop down onto the bed next to me. That was the most excitement I had in TEN days.

But I have a class act husband and the world’s greatest friends. So many people stepped in to help. Garrett was an absolute hero – making lunches, driving to school, piano, scouts, soccer, football, laundry, bedtime, EVERYTHING. Members of my church brought me dinner and my sweet friends watched my kids, cleaned my kitchen, gave my kids rides, etc. The boys were so kind and understanding. They always came home from school and made sure I was laying down with my feet propped.

I did get some really great quality time with Eli. When he was home with me he would bring me books to read to him. And let’s be honest, we also watched freaking Coco for 5 days in a row and it was amazing.

How is the baby now?

After my last Dr’s appointment we are feeling so much happier and confident! The hemorrhage has diminished in size, my uterus and the baby are bigger now and the placenta is really well attached. The Dr. was very happy about what she saw and said as long as I still take things easy, everything should be just fine.

So now I’m going up and down the stairs slowly and trying not to stand too long at a time. I have to be honest…I’m pretty bummed I can’t exercise like I was before. The thought of getting out of the groove for so long and having to get back into it in 6-7 months later is really hard for me to wrap my head around. But I can do it. It’s going to be a mind over matter thing and all I really want is a healthy baby. I’m finally feeling good and confident that this will be a great pregnancy and it finally felt like the right time to share it with you all!

Thank you from the bottom of my heart for all of your excitement and love! It’s been hard keeping this from you girls but now I’m excited to share more with you!!

MY DRESS PICKS FOR YOUR UPCOMING HOLIDAY PARTY